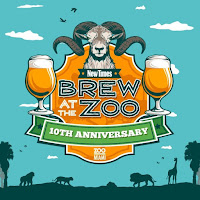 Miami New Times will host the 10th Annual Brew at the Zoo on May 11, 2019. Less than 15 minutes away by car from our hotel in Miami, this poplar Zoo Miami event will feature beer and spirits from around the world, great food and exciting live entertainment. Brew at the Zoo will include a whole new elevated VIP experience this year that will include much more food and expanded space.

If you’re a beer connoisseur and would like to enjoy an exciting event with live music in an exotic backdrop, then don’t miss this festival of mainstream and craft beer from breweries around the world. Taste dozens of beer samples at vendor booths and learn more about the ingredients that go into your brew.

This year, participating breweries will include Concrete Beach, Guinness, Veza Sur, Hop Life, the Shed, Gulf Stream, Biscayne Bay Brewing, and many others. The location of our hotel near Zoo Miami offers unbeatable access to the event, so don’t miss out on all the fun!

Join the Cinco de Mayo celebration as you stay at our budget Miami hotel. Thousands of festive people will be tipping their sombreros to the Mexican army’s 1862 victory over France at the Battle of Puebla on May 5th. Miami’s largest fiesta will be located on Brickell Avenue between the W Hotel & Bank of America, replete with sombreros, mustaches, tequila shots, premium margaritas and Mexican beer. This popular event will also feature energetic DJs, authentic Mariachis and much more.

For many Americans, this yearly event means enjoying Mexican food and sipping margaritas, but Cinco de Mayo, which means May 5th in Spanish, is probably one of the most misunderstood Mexican holidays. Cinco de Mayo has become more of an American fiesta than a Mexican holiday, and most non-Mexican Americans have no idea about the day's history. If you went to any bar on May 5th and asked someone what this day was about, they probably wouldn’t know, but that doesn’t ever stop the fiesta.

Miami’s Cinco de Mayo festivities bring people together from all parts of the world for a wild evening, so don’t miss this popular annual event. The friendly staff at our cheap hotel in Miami can provide more information about the Brickell event and several other local fiestas that will occur on this festive day.

G+
Posted by Comfort Suites Miami at 9:10 AM No comments:

The Ultra Music Festival (UMF), a Miami-born electronic dance music festival, has grown into an industry heavyweight and global brand over two decades, and it’s undergoing some major changes this year. This popular event will be held for the first time at Historic Virginia Key Beach Park & Miami Marine Stadium on March 29 – 31, 2019 and our hotel in Miami by the Florida Turnpike will make it easy to access all the excitement.

With a new venue locked in, music fans from all over the world are ready to experience UMF at its new home on Virginia Key. It was first held on Miami Beach, but besides a brief tenure at Bicentennial Park, it had primarily been held at Bayfront Park in downtown Miami. In November 2018, festival organizers began making plans to move the Ultra Music Festival to the barrier island of Virginia Key, using Virginia Key Beach Park and surrounding areas near the Miami Marine Stadium as venues.

Following the news that Ultra Music Festival officially moved to its new venue at Historic Virginia Key Beach Park & Miami Marine Stadium, RESISTANCE, Ultra Worldwide’s esteemed underground concept, revealed that it will have its own island, taking over the Virginia Key Beach Park side of the venue for the weekend. This is a significant upgrade as the concept will provide more space and hours than ever before. The festival will now officially run from 2pm – 2am on all three days!

Over 165 thousand people attended Ultra Music Festival in 2018 and it's expected to receive more visitors in 2019, so make sure you get out and discover what the buzz is all about at this year’s highly anticipated music event. The courteous staff at our budget Miami hotel will be happy to provide more info about UMF.