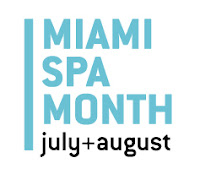 Transport your mind, body and soul to the ultimate spas when you stay at our hotel in Miami. Treat yourself to some of the best kept secrets of Miami during Miami Spa Months. From July 1 to August 31, spa lovers can access unique offers and enjoy some professional pampering at discounted rates.

Miami is renowned for spas that rank among the "Best Spas in America," and are beloved by spa connoisseurs around the world. Miami Spa Months offer locals and visitors up to 50% off regular prices. Book rejuvenating special treatments for as low as $109.00 and indulge in the highest standards of relaxation. Discover unique procedures such as lymphatic therapy, prenatal and couples’ massages, flower-based facials, and med spa treatments such as acupuncture detoxes. There’s even something called a vampire facial, which may or may not give you eternal life. You let us know!

With more than 40 participating spas across Miami, you have plenty of options for unique treatments so don’t miss out on these special limited time offers. The location of our affordable Miami hotel next to the Florida Turnpike will provide you with convenient access to all the pampering and relaxation.
Posted by Comfort Suites Miami at 6:58 AM 2 comments: 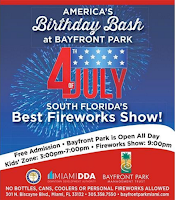 Celebrate America’s independence in the heart of downtown Miami at Bayfront Park when you spend the night at our budget Miami hotel. This year's July 4th festivities will include a kids' zone, delicious food and soft drinks as well as the largest and most spectacular free fireworks show in South Florida.

The Fourth of July – also known as Independence Day – has been a federal holiday in the United States since 1941, but the tradition of Independence Day celebrations goes back to the 18th century and the American Revolution. On July 2nd, 1776, the Continental Congress voted in favor of independence. Two days later, delegates from the 13 colonies adopted the Declaration of Independence, a historic document drafted by Thomas Jefferson. From 1776 to the present day, July 4th has been celebrated as the birth of American independence.

Bayfront Park, which runs along Bayside Marketplace off Biscayne Boulevard, will be open all day on July 4th. The kids' zone runs from 3pm to 7pm ahead of the dazzling fireworks at 9pm. If you bring any bottles, cans, coolers or personal fireworks to this popular event, then you will have to watch it from another location because they are not allowed. The friendly staff at our hotel in Miami will be happy to provide more information about this and other July 4th celebrations in the area.
Posted by Comfort Suites Miami at 6:31 AM 1 comment: